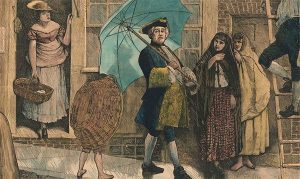 With the rainy season well and truly upon us (which for the non-UK readers is eleven months and three weeks of the year) punt customers ask us one question before any other: “Do you have a spare umbrella?”

Historically speaking, the answer was not always yes. Did you know that in the year 1797 there was only one umbrella in the whole of Cambridge? Despite having existed since antiquity, the umbrella had not taken off in England. When Jonas Hanway became the first man to use one in the streets of London he was jeered by urchins and carriage drivers who believed the device was suspiciously French.

The sole umbrella in this city was leased out by the hour from a local shop.

Thankfully, today’s brave traveller does not have to wait to borrow the only umbrella in the city. Cambridge Punters are always happy to lend a customer a brolly. Or if you’d prefer to bring your own, you can even support local conservation by buying this one. 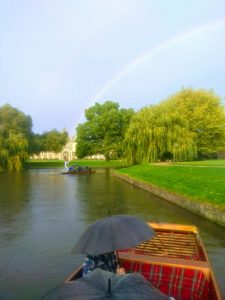